Mercedes-Benz is big on SUVs. How big?

Here’s What Happened Last Time in 2019

It sells nine models in the U.S. that are so successful that it’s moving production of the next C-Class sedan from Alabama to South Africa to make room to build more.

Mercedes-Benz still has a full lineup of cars, however, in part because they’re still popular in other parts of the world. But there’s one that splits the difference between them and the SUVs.

It’s the E 450 4MATIC All-Terrain, which you can think of as a short utility vehicle. It’s one of a handful of station wagons still available in the U.S., none of which are from domestic brands.

It comes standard with all-wheel drive and about two inches of additional ground clearance compared to the rest of the E-Class lineup on which it is based, but still just 5.8 inches. Black plastic wheel arch covers and roof rails give it slightly rugged looks and power is provided by a 362 hp 3.0-liter turbocharged inline-six-cylinder engine.

It’s essentially Mercedes-Benz’s version of the similar “off-road” wagons from Volvo and Audi and has about the same footprint as a Mercedes-Benz GLE SUV, which offers more passenger and cargo space for with the same engine for a bit less than the All-Terrain’s base price of $68,650.

So why go for the wagon?

Well, there’s that car thing. The All-Terrain has better handling and the ride quality on its standard air suspension system is excellent, although the low-profile rubber wrapped around the 20-inch wheels on my test car didn’t do it any favors on rough roads. 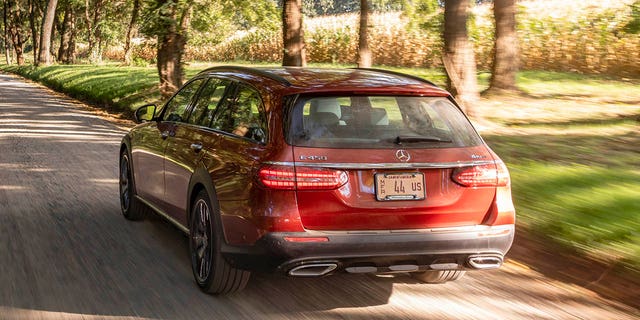 If they’re extra crunchy or covered in deep snow, the suspension can add an inch of ground clearance, but you’ll still have less space down there than the GLE and the lift only works up to 22 mph. More important for some, the roof is also low, which makes it easy to reach to load bikes and snowboards and all that “lifestyle” gear on top. 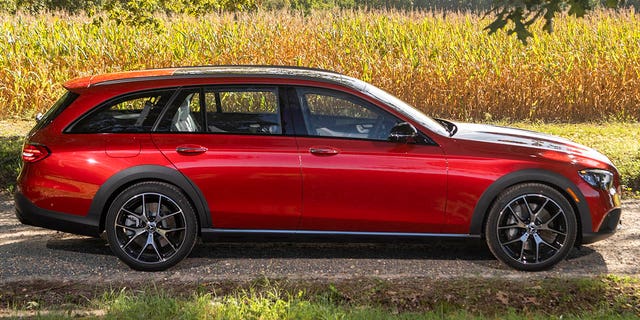 The All-Terrain’s cargo area is long and wide and the rear seat has a fold-down center section to accommodate long items like skis and fishing poles. There’s also a surprise hidden underneath the floor. 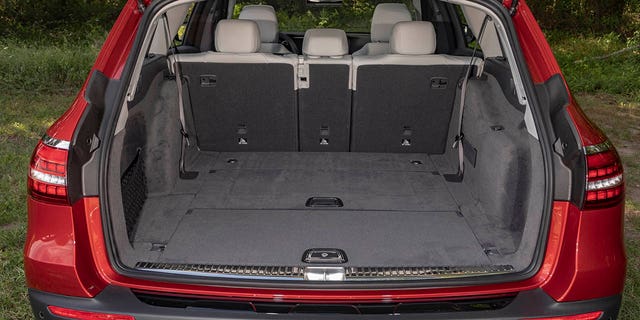 It’s not a full-size spare tire, but a rear-facing jump seat that can accommodate two short people and probably not for very long. It’s snug, but could be handy for the school carpool. 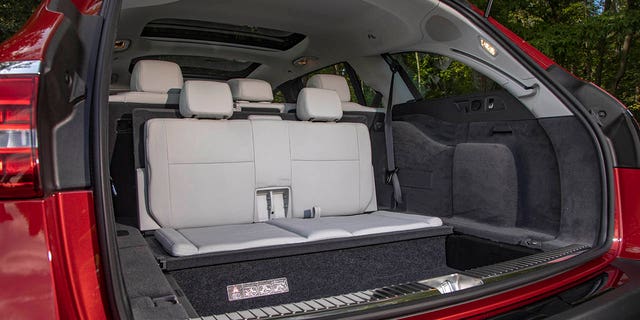 Up front it’s pure E-Class with its swoopy dashboard, dual foot-wide digital displays, multicolored ambient lighting and optional adjustable massaging seats that can be heated or cooled or, for some reason, both simultaneously. Hey, we all need to get a little crazy sometimes. 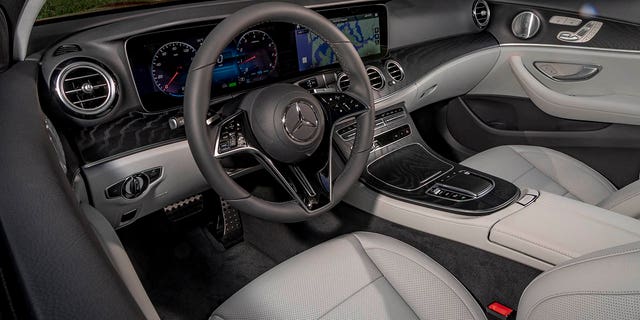 It is on the small side for a midsize vehicle, however, so rear legroom can be a little tight, even with kids. The standard and sturdy synthetic MB Tex upholstery is well suited for them and the kind of trip into the great outdoors the All-Terrain was made for, but much fancier leather is available if you want to take your chances.

A heated steering wheel is also on the options list, where it doesn’t belong in a car like this. I spent a week driving in the snow as I should and missed it every morning. 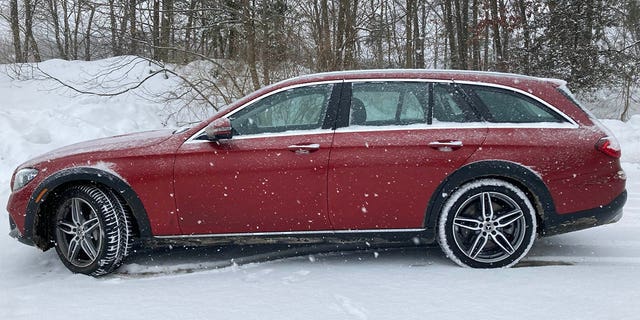 The All-Terrain was unflappable even through some squalls thanks to a combination of a set of Pirelli Sottozero (translation: below zero) tires and the 4Matic all-wheel-drive system, which doesn’t waste time spinning a tire before sending the power to all of them in these conditions.

Conditions, I should say, that often rendered the All-Terrain’s otherwise excellent active driving aids — including a robust lane-centering system that can also check for traffic and steer into the next lane when you hit the turn signal — temporarily inoperable due to the sensors getting covered in muck. To be fair, some of the weather was so bad that I probably shouldn’t have been driving, either.

Look, Mercedes-Benz knows this is a niche product with a limited audience, as its sports cars are. Like the E 63 S, which is a version of this wagon powered by a 603 hp V8 that’s more for race tracks than making tracks in the snow. Either way, for customers looking for alternatives to SUVs that can still haul, they’re a perfect fit.

Jabil (JBL) Outpaces Stock Market Gains: What You Should Know

Working With A National Moving Company- Dos And Don’ts!!!

The Most Effective Method to Choose a Web Design Firm

Can The Impact Of Arthritis Differ Between The Sexes? How Can It Be Cured?

Try These Natural Remedies For Helping Your Back Pain Problem

With DeMar DeRozan in the protocol, undermanned Bulls beat Denver

The Cost Of Incorporating A Startup Business