In a video posted on social media, the leftist former leader called on Brazilians to “avoid gatherings” just days after a Supreme Court judge overturned his corruption convictions, opening the door for a possible future presidential run.

Lula, who led Brazil from 2003 to 2010, received a jab of the Chinese CoronaVac vaccine in Sao Bernardo do Campo, on the outskirts of Sao Paulo.

“It is the government’s duty to guarantee vaccines,” said Lula, who has not confirmed whether he plans to challenge far-right President Jair Bolsonaro in elections set for next year.

Brazil’s COVID-19 vaccine rollout has been hampered by long delays and inefficiencies, heaping pressure on Bolsonaro, a coronavirus sceptic who has faced widespread criticism for his government’s handling of the pandemic.

Bolsonaro, who previously said he would not get a COVID-19 jab, last week signed a bill to accelerate vaccine purchases.

“Let’s trust our government, trust the health ministry,” he said on Wednesday. “This is an administration of seriousness and responsibility.”

Brazil has registered the second-most COVID-19 cases in the world after the United States, according to Johns Hopkins University data, at more than 11.3 million infections.

More than 275,100 people have died in the country so far, as the healthcare network is buckling under the pressure of mounting COVID-19 hospitalisations, fuelled in part by the spread of a more easily transmissible variant of the virus.

People walk past graffiti in Rio de Janeiro that reads, ‘Coronavirus, together we will win that battle’ [File: Pilar Olivares/Reuters]

“Unless serious measures are taken the upward trend now flooding the health system and becoming more than its capacity will result in more deaths,” World Health Organization (WHO) Director-General Tedros Adhanom Ghebreyesus said during a news briefing on Friday.

He said all stakeholders should take the situation seriously, adding that neighbouring countries could be affected.

“The situation is deeply concerning and the measures that should be taken should be as serious as possible,” Tedros said.

Some Brazilian governors and local leaders have sought to impose lockdowns amid a lack of national public health restrictions, but that has also proven difficult.

Police broke up an illegal party at a Sao Paulo nightclub that had nearly 600 people in attendance in the early hours of Saturday. 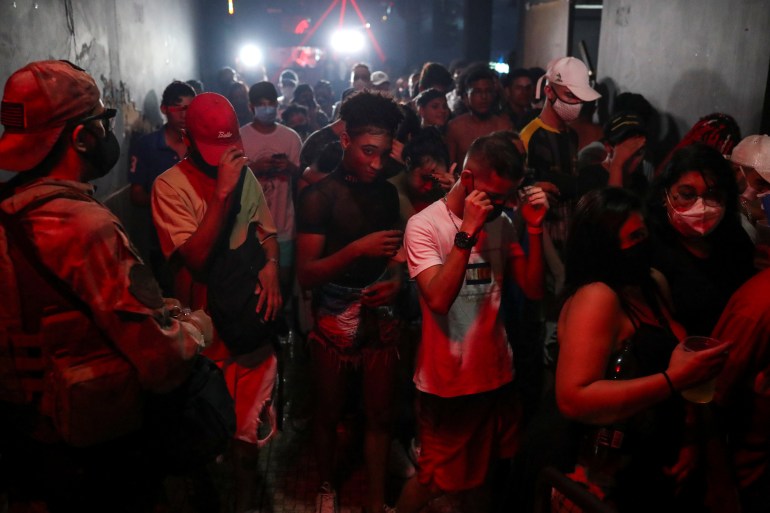 People leave a nightclub after it was broken up by the authorities for violating COVID-19 lockdown rules in Sao Paulo on March 13 [Amanda Perobelli/Reuters]Hundreds of young partiers, few of them masked, cowered on the dance floor as police silenced the music and arrested organisers.

“I could never imagine hundreds and hundreds of people in a place without a single window, with all the doors closed,” said Eduardo Brotero, the police officer who ran the operation.

“More than 1,000 people are dying every day in Brazil. It’s like five plane crashes a day,” Doria said when the lockdown was first announced, blaming Bolsonaro for the crisis.

“Many of the Brazilians who have been buried died because you didn’t do what you were supposed to: lead,” he said.

J.D. Vance’s Investment Firm Narya Got Canceled by the State of Delaware

‘Annie Live!’ Is the Last Dying Breath of Feel-Good TV

Cardi B: It’s ‘a dream’ to join Playboy family in new role