‘Covid is taking over’: Brazil plunges into deadliest chapter of its epidemic

It was midway through February when André Machado realized Brazil’s coronavirus catastrophe was racing into a bewildering and remorseless new phase. “The floodgates opened and the water came gushing out,” recalled the infectious disease specialist from the Our Lady of the Conception hospital in Porto Alegre, one of the largest cities in southern Brazil.

Since then, Machado’s hospital, like health centres up and down the country, has been engulfed by a deluge of jittery, gasping patients – many of them previously healthy and bafflingly young. Among the recent admissions was a heavily pregnant 37-year-old who was brought in complaining of breathing difficulties and a cough. Doctors performed an emergency C-section to deliver the baby in a desperate bid to take the pressure off the expectant mother’s Covid-racked lungs.

“We’re trying to help people but this disease is much faster and more aggressive than the tactics we’ve been using,” Machado, 44, said of his team’s efforts to keep pace with a tripling of admissions.

“It’s like we’re flogging a dead horse,” he said, before adding: “This disease is going to kill many more people in Brazil.”

At the end of last year Brazil’s president, Jair Bolsonaro – a Donald Trump-worshiping populist who has gleefully sabotaged Covid containment efforts – declared his country had reached “the tail end” of what was already one of the world’s worst outbreaks.

Three months later Latin America’s largest nation has lost almost 100,000 more lives – taking its total death toll to more than 275,000, second only to the US – and been plunged into the deadliest chapter of its 13-month epidemic. 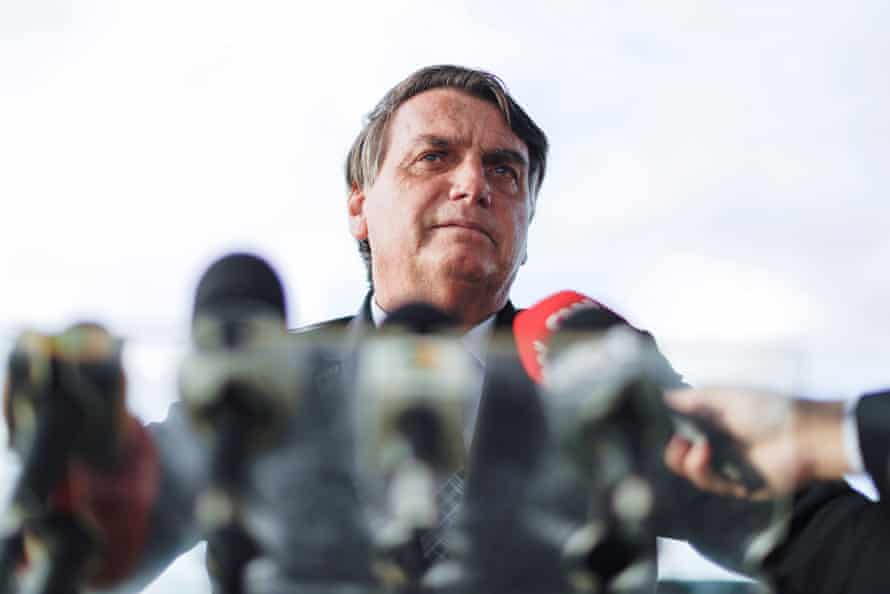 This week, as a record 2,349 daily deaths were reported, the former leftist president Luiz Inácio Lula da Silva castigated Bolsonaro’s “moronic” handling of the crisis and urged citizens to confront their incompetent “blowhard” leader. “This country is in a state of utter tumult and confusion because there’s no government. I’ll repeat that: this country has no government,” Lula declared, blaming Bolsonaro’s “uncivilised” leadership and rejection of science for the scale of Brazil’s disaster.

“So, so many lives could have been saved,” Lula claimed, warning: “Covid is taking over the country.”

As the emergency intensified this week, frontline health workers from Porto Alegre to Recife, a coastal city 3,000km further north, described scenes of heartbreak, despair and exhaustion as intensive care units and cemeteries fill up like never before. 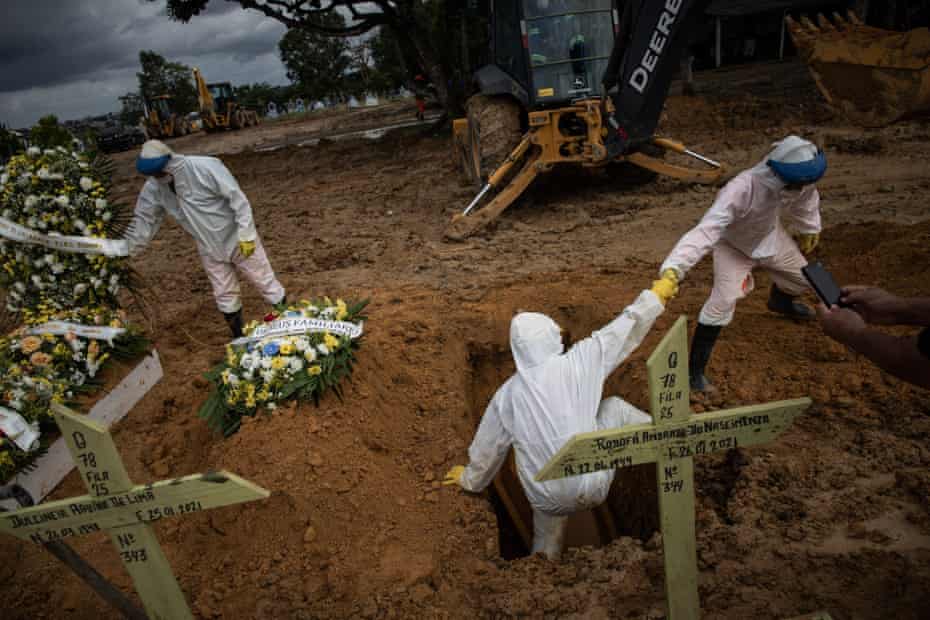 “It feels like we’re putting a Band-Aid on a bullet wound,” said Eduarda Santa Rosa Barata, a 31-year-old infectologist who works in three ICUs in the north-eastern capital of Pernambuco state, all now stretched to the limit. “We’re engaged in damage reduction … You open new beds and they fill up immediately.”

A few days earlier, Barata had admitted a 37-year-old man who had no underlying medical conditions but whose lungs were so badly damaged he needed intubation. “It seems so random,” she said. “It’s a bizarre disease. It’s frightening.”

Machado saw several explanations for the torrent of cases he and other doctors are now seeing, including political mismanagement and the slackening of social distancing measures, principally among the young. In recent months such containment efforts have largely collapsed, with schools and businesses reopening and Bolsonaro’s tourism minister even urging citizens to start holidaying again.

But the doctor suspected a third, more troubling element was also at work: an enigmatic and apparently more contagious variant called P1 that is thought to have emerged in the Amazon region in late 2020 but is now circulating across Brazil, including in the southern state of Rio Grande do Sul, where Machado works. 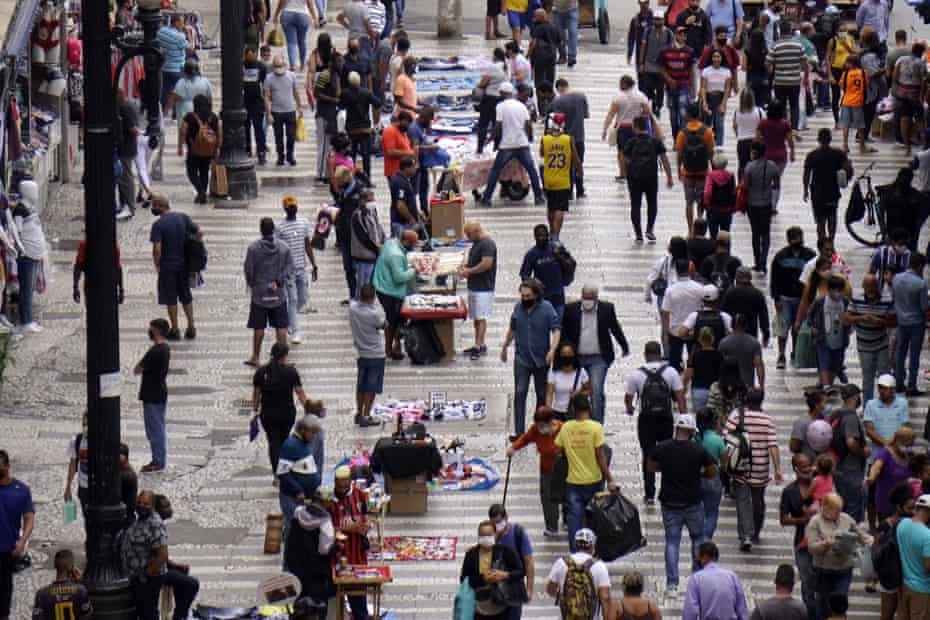 “This isn’t just theoretical. It’s something we’re seeing in practice,” Machado said of the variant, at least 10 cases of which have been detected in the UK and 15 in the US.

“Before the end of 2020, you’d get a family and one member would be infected but not the other three or four members, even though they lived in the same environment. You don’t see this any more. If there’s one confirmed case, everyone ends up getting infected by the virus,” he said. “It’s obvious that this new variant is now circulating among us.”

Just how much of Brazil’s current crisis is down to the new variant, or other variants traced to the UK and South Africa, is a matter of intense debate. Some experts believe the variant has provided a convenient smokescreen for political leaders who have failed to rein in a disease President Bolsonaro has dismissed as a “little flu”. As he ordered a two-week emergency shutdown in Brazil’s most populous state on Thursday, the São Paulo governor, João Doria, claimed the variant played a key role in pushing hospitals to the brink. “This new strain of the virus is very aggressive and very dangerous,” Doria warned, claiming Brazil was “collapsing” under the weight of the surge in cases.

Jesem Orellana, an epidemiologist from the Amazon city of Manaus, where hospitals recently ran out of oxygen as a result of the explosion of infections, was unconvinced mutations were the main culprit. “From a political point of view, it’s much easier to place the blame on the variant. But we all know that the worst variant of all is the way the epidemic has been mishandled,” he said.

Orellana suspected that having failed to halt coronavirus with unpopular and economically painful lockdowns, politicians at all levels of government were now “using the variant as a crutch to prop themselves up and to justify their mistakes and their negligence over the epidemic”. 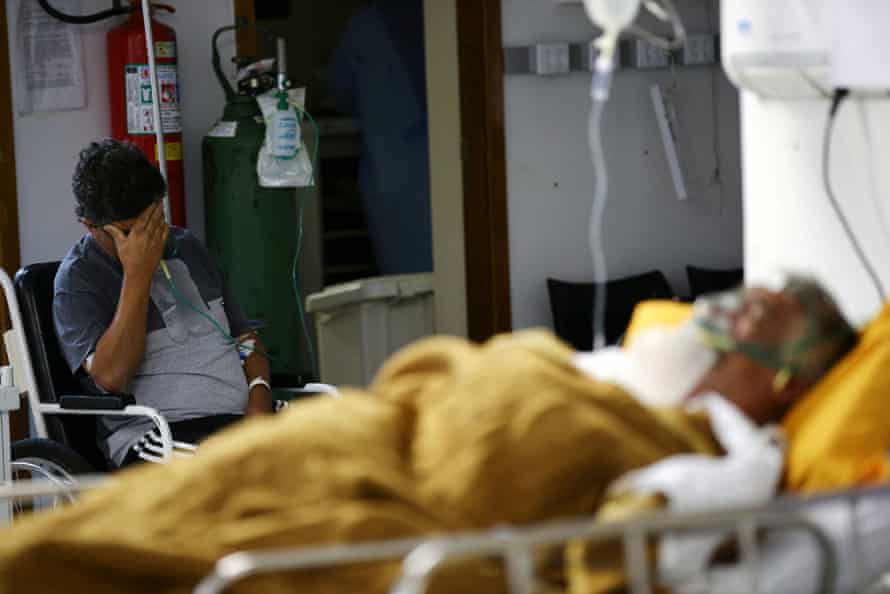 Patients in the emergency room of a hospital that is overcrowding in Porto Alegre, Brazil, on 11 March. Photograph: Diego Vara/Reuters

But Marcos Boulos, a leading infectious disease specialist, said he had no doubt the P1 variant was contributing to Brazil’s soaring caseload: “There’s no way of hiding this.” Boulos also said anecdotal evidence from hospitals around Brazil suggested the variant was also producing more serious cases in young people. “We don’t yet have the data to categorically affirm this but it’s possible, from what doctors are seeing,” said the University of São Paulo professor.

“Here in the hospital we’ve got a 20-year-old woman in our ICU in serious condition. Today you have serious patients in ICU from all age groups. Before we’d say it was almost 90% elderly. Today they’re still the majority, but not in same way,” Boulos added.

“We don’t yet know how this works, but it’s what we are seeing … There’s no other reason why young people would suddenly start suffering from a more serious disease.”

São Paulo’s health secretary, Jean Gorinchteyn, this week told reporters that in many of that state’s ICUs half of patients were now under 50. “I’m talking about 26 and 29 and 30-year-olds – often in a very grave condition,” he said, urging citizens to avoid crowds and remain at home. “We all need to understand that what is happening right now is a different pandemic from the one we saw last year,” Gorinchteyn claimed.

Barata said she also had the impression that her Covid patients were getting younger, and reaching hospital in a worse condition. Despite having been immunised with the Chinese-produced CoronaVac vaccine in February, she admitted feeling more fearful now than during the previous peak last June. “It feels like every day the virus draws nearer … Everywhere you look around you, you can say there’s someone who has symptoms, or who is sick, or in hospital … The mother-in-law of one of my colleagues is in critical condition in intensive care,” she said.

Barata said she was uncertain what, if any, role new variants were playing in Brazil’s latest misfortune, but whatever – or whoever – was responsible, she feared the human tragedy was far from over: “It feels like the disease is laying siege to us, closing in and infecting everyone who hasn’t yet caught it.”

Machado said that after the delivery of her 36-week-old baby, the expectant mother and her child were rushed to intensive care, where the former was put on a ventilator. “We don’t know if she’ll make it,” he admitted last week as the hospital’s Covid-19 wards reached the brink of collapse and fears grew over the global impact of Brazil’s unchecked epidemic.

Twenty-four hours later, at 10 minutes past midnight, the woman was gone, leaving five orphaned children and a country in disarray.

J.D. Vance’s Investment Firm Narya Got Canceled by the State of Delaware

‘Annie Live!’ Is the Last Dying Breath of Feel-Good TV

Cardi B: It’s ‘a dream’ to join Playboy family in new role