Review: Frances McDormand is at her finest in ‘Nomadland,’ a sublime ode to American wanderlust

Near the beginning of “Nomadland,” Chloé Zhao’s wise, wistful hymn to the open road, Fern (Frances McDormand) drives her van through a chilly stretch of Nevada desert, singing to herself as the wind lashes her windows. Her destination is an Amazon warehouse where she will spend weeks bubble-wrapping and sealing packages for delivery, a grueling godsend of a job that will help her and many other itinerant workers get through the rough winter months ahead. The song she’s singing is “What Child Is This?,” a seasonally appropriate choice that sent my thoughts drifting back centuries to another group of wanderers, seeking shelter from a world that seems oblivious to their sufferings and ignorant of their worth.

‘It was the only ending for me’: The finale of ‘Promising Young Woman’ explained

“Nomadland,” which will begin a weeklong virtual run Friday before opening more widely in February, does bear a passing (and sometimes amusing) resemblance to a modern-day nativity play. Fern, played by McDormand at the plainspoken peak of her powers, is a widow in her 60s with no children to speak of, though at one point she does awkwardly cradle a sleeping infant. There is no transcendence at the end of her long, harrowing journey, but there are unexpected gifts, guardian angels and places of refuge. It would be hard to overlook the spiritual presence — a good word for it would be “grace” — that hovers over every frame of this movie and the spare, wrenching story it has to tell.

Sometimes that grace manifests itself in the unobtrusive beauty of Joshua James Richards’ widescreen images, in the gentle curve of a highway or the sunlight gleaming over a crowded RV park. (It also manifests itself in the plaintive musical score, excerpted from the work of the Italian composer Ludovico Einaudi.) We sense Fern’s gratitude as she tucks into a hot cup of chili with other hungry travelers, or her satisfaction when she glues together the broken pieces of a plate, a cherished gift from her father. “OK,” she says, appraising her good-enough handiwork. Like her fellow nomads, she’ll take every scrap of grace she can get.

The movie begins in the winter of 2011, some time after the death of Fern’s husband, Bo, and the collapse of Empire, Nev., the U.S. Gypsum-owned factory town where they lived for decades. Fern may be a fictional construct, but Empire’s history is real: When the local Sheetrock plant shut down in December 2010, the whole town followed suit, leaving hundreds without jobs or homes, and spurring some to embark on an entirely new way of life. Setting out across the country in vans and RVs, they joined a movement of self-described “workampers,” seeking employment, community and liberation — a phenomenon chronicled at length by the journalist Jessica Bruder in her 2017 nonfiction book, “Nomadland: Surviving America in the Twenty-First Century.”

“Nomadland” the movie, which won the top prizes at the recent Venice and Toronto film festivals, is less an adaptation of Bruder’s work than a free-form conversation with it. In addition to writing and directing, Zhao served as her own editor, and she has shaped the story as a series of discrete, offhand moments, keeping both Fern and the movie in continual motion. Fluid, inventive and even playful in ways that belie its generally somber tone, “Nomadland” exists at that blurry juncture where fiction and nonfiction meet — a well-traveled zone that is nonetheless still rife with artistic possibilities, as filmmakers as far-flung as Jia Zhangke and Pedro Costa are still discovering. As she’s demonstrated in her earlier features, “The Rider” (2017) and “Songs My Brothers Taught Me” (2015), Zhao belongs to the same cinematic tradition, one that she advances here with masterly assurance.

Frances McDormand and David Strathairn appear in a scene from the movie “Nomadland.”

Many of the smiling, careworn faces we see in “Nomadland” belong to real-life nomads, some of whom were featured in Bruder’s book. Not all the stories they share here are strictly true — Zhao is both a rigorous realist and a stealth illusionist — but they tell them with a jaundiced wit and a sturdy conviction that draws no distinction between acting and simply being. Some of them talk about life-altering traumas they’ve experienced, or long-deferred dreams they decided to pursue before it was too late. More than one testifies to the brutality of an American economy that ravaged their savings and left them with nowhere — which is to say, everywhere — to go.

Some of the most memorable supporting players are women roughly Fern’s age, like the hardy Linda May, whom we first meet at the Amazon warehouse, and who shares about how financial desperation once almost drove her to take her own life. (Her dogs, Coco and Doodle, made her reconsider.) And then there’s Swankie, a gruff, generous-spirited woman who helps Fern change a flat tire and berates her for not having a spare: “You could die out here!” Swankie herself has long since resigned herself to that fate: Knowing her time may be short, she’s chosen to spend her remaining months enjoying the peace and freedom of life on the road.

That freedom, of course, is often all too conditional. The white van that Fern calls home — she actually calls it Vanguard — has been ingeniously tricked out with all the amenities she needs: a mattress, a side table and a bucket into which she violently relieves herself, in one of McDormand’s earthier bits of business. But her van is also a continual source of worry, whether it’s an engine that suddenly won’t start or a stranger rapping on her window, urging her to move it along.

And move it along she does. Fern heads to South Dakota’s magnificently craggy Badlands National Park, where she picks up trash on the campgrounds, and later to a Nebraska field, where she takes part in the fall sugar-beet harvest. There are no on-screen titles to identify all the places Fern visits; sometimes you can figure them out based on storefront signs, scraps of dialogue or especially distinctive landscapes. Or you can just let the vistas wash over you, losing yourself in Zhao’s neo-Steinbeckian vision of America: More than once, Fern walks down empty streets and past abandoned storefronts, remnants of once-thriving civilizations that time and capitalism ultimately forgot.

The America of “Nomadland” is vast and gorgeously desolate, stretching on forever toward dusky horizons. It’s also a surprisingly small world, where workampers following the same migratory patterns have a habit of bumping into each other. Zhao introduces a sly variation on this idea in the character of Dave (David Strathairn), a bumbling charmer whom Fern keeps running into, and whose unreciprocated attraction to her is sweetly obvious from their first RV-park encounter. Strathairn and McDormand’s scenes together are so charming and low-key sexy — his puppy-dog persistence keeps bumping up against her stubborn resolve — that you may wonder if “Nomadland” is about to slip its road-movie bonds and slide into full-blown romantic comedy. 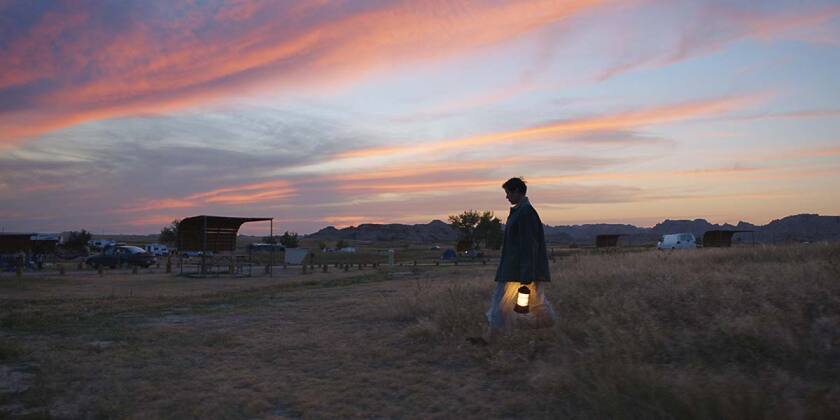 It doesn’t, exactly, though I suspect Zhao could have pulled it off in a movie that eludes easy categorization at every turn. Some may emerge from “Nomadland” feeling both moved and slightly puzzled, wondering why a picture so at ease with documentary techniques couldn’t have just been a documentary, rather than placing a two-time Oscar winner front and center. Was that decision a misguided bid for prestige, a classic Hollywood compromise in the mold of one of Terrence Malick’s A-list abstractions? McDormand may be the most unadorned of movie stars, but her flinty screen presence is as forceful and recognizable as that of any actor working today. For all the mundane things she does in this movie — scrub walls, clean toilets, shovel beets, operate a power drill — the one thing she doesn’t do, and perhaps can’t do, is vanish into her own skin.

And this inability, far from proving fatal to Zhao’s experiment, is utterly crucial to its success. “Nomadland” isn’t just a chronicle of lives on the margins; in showing us individuals who have retreated from the mainstream, blazed their own trails and forged their own identities, it becomes its own hauntingly idiosyncratic act of creation. McDormand doesn’t disappear into Fern; she’s revealed by Fern, and Fern is revealed by her. The innate kinship between character and actor is as obvious as their shared first initial. (We never learn Fern’s surname, except that it starts with “McD.”) And while the qualities we often associate with a McDormand performance may be tamped down here — the salty comic aggression, the steely refusal to back down — they persist nonetheless in Fern’s ever-watchful gaze and thin, guarded smile.

We can read those qualities like a map, and they lead us deeper inward, giving shape and form to the vague personal history that brought Fern to this point. There are other hints of that history, too, in the movie’s circular narrative structure and in the late-emerging character of Fern’s sister, Dolly (Melissa Smith), who briefly opens a window onto their tetchy yet tender relationship. At one point Dolly, sympathetically defending her sister’s way of life to some skeptical friends, likens Fern to the early American pioneers, a comparison that feels both accurate and woefully inadequate.

Fern may belong to a nomadic tradition, but tradition alone can’t account for her deep inner restlessness. She accepts, without having to explain, her own compulsions and contradictions: the way she recoils from a soft, warm bed as if it were the most alienating thing in the world, or the fact that she yearns for both the comforts of solitude and the company of strangers. You feel grateful to have been one of those strangers, floating above and alongside Fern, taking a strange satisfaction in her persistence. It is good that she continues to seek — and that perhaps someday, somewhere, she will find.

Rating: R, for some full nudity