The U.S. announced a $230 million deal with a coronavirus test-maker Ellume to provide Americans with millions of at-home tests.

Innova Medical Group’s top executive would like to use the rapid tests to slow infections closer to home. Los Angeles County hospitals overflowed with patients amid record deaths this winter during the darkest phase of the pandemic.

But Innova has not yet secured Food and Drug Administration authorization to sell the tests in the United States. Instead, test-packed jets fly overseas to serve British Prime Minister Boris Johnson’s “moonshot” of mass testing.

“I’m a bit frustrated,” said Daniel Elliott, president and CEO of Innova Medical Group. “I think we’ve done everything we’ve possibly had to do, need to do and have been asked to do to get the testing through the approval process.”

More studies are underway to demonstrate the accuracy of Innova’s test, which costs less than $5 and can deliver results within 30 minutes. Researchers at Harvard, the University of California, San Francisco and Colby College have evaluated the test and other private research groups are conducting trials on people with or without coronavirus symptoms, Elliott said.

Experts say the United States could quickly expand the nation’s limited testing supply and improve speed by authorizing rapid, paper-based antigen tests such as Innova’s diagnostic. Advocates say these tests are cheaper, easier to make and can be used two to three times each week to detect when someone is infectious and likely to pass the virus to others.

The drawback: Rapid tests are less precise when compared to lab tests, which take longer to complete and cost $100 or more. 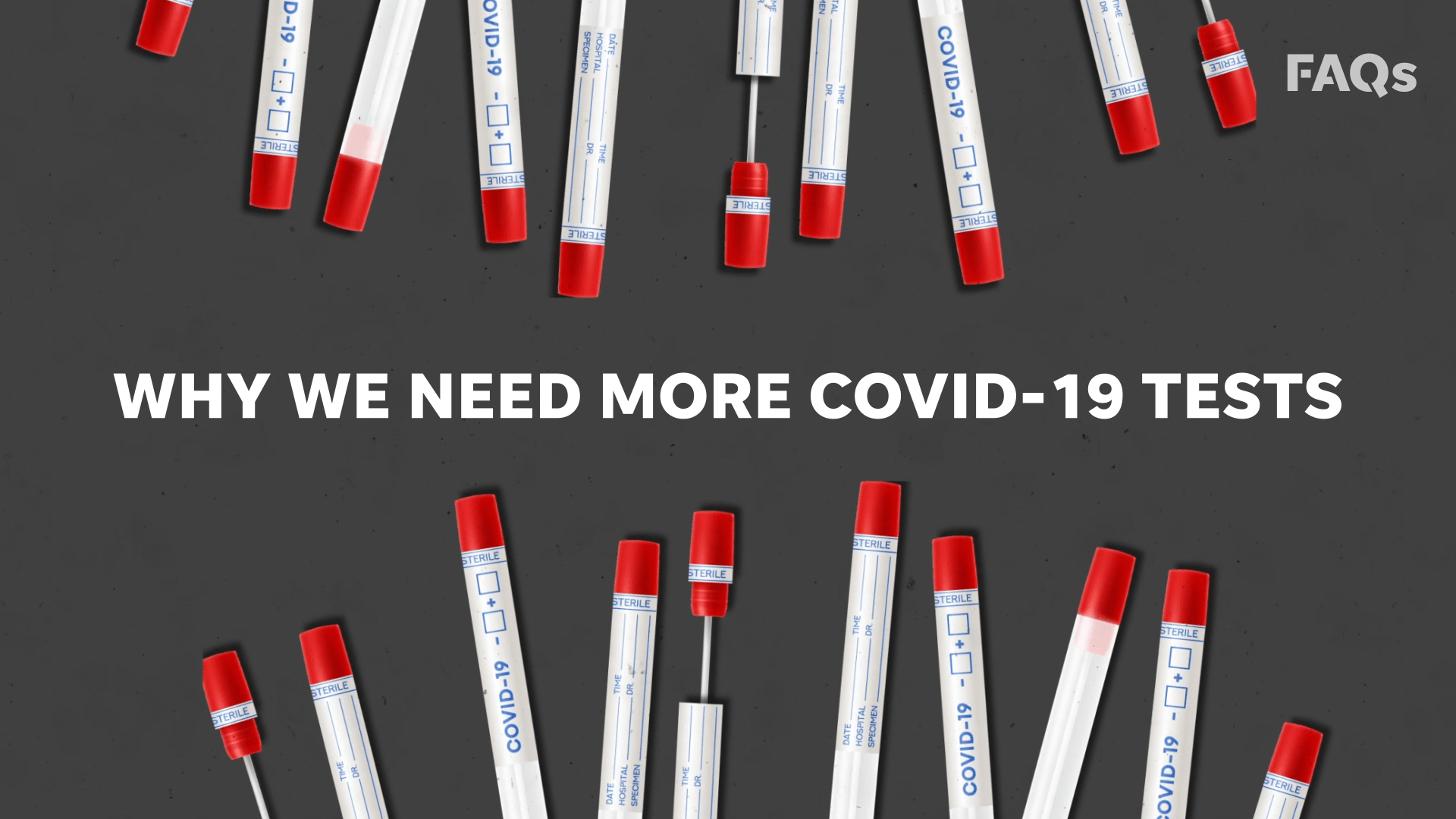 COVID-19 testing: Positivity rates and why they are so important

COVID-19 widespread testing is crucial to fighting the pandemic, but is there enough testing? The answer is in the positivity rates.

The Biden administration is endorsing both methods – investing in quick and cheap antigen tests and lab-based polymerase chain reaction, or PCR, tests, which have been the mainstay since last spring.

Earlier this month, administration officials announced six unidentified suppliers will deliver 61 million rapid tests by the end of summer. The Department of Defense also reached a $230 million deal with Australia-based Ellume to open a U.S. factory and make 19 million antigen tests each month, 8.5 million of which will be provided to the federal government.

‘COVID tongue’: Tongue, mouth ulcers may be other symptoms of COVID-19, researcher says

Wednesday, the Biden administration unveiled a $1.6 billion plan to bolster testing in schools and other settings, make essential supplies and invest in genomic sequencing to identify coronavirus variants.

About half of the funds will be spent to shore up domestic production of critical testing supplies such as plastic tips and containers labs have had trouble consistently securing – a supply-chain gap delaying results when samples are sent to better-equipped labs. The Biden package also included money to purchase raw materials needed to make rapid antigen tests.

School districts in Seattle, Nashville and Maine already are using rapid tests to detect the virus among teachers, students and parents. The rapid tests are meant to ease anxiety over safe school reopening.

“We need a range of options here,” said Carole Johnson, the Biden administration’s COVID response team testing coordinator, “and that includes easy to use and simple and affordable options.”

‘One of America’s best and most powerful tools’

The nation could add significantly more testing if federal regulators authorized tests from companies that are able to make massive quantities of these tests now, advocates say.

Dr. Michael Mina, a Harvard epidemiologist who has long pushed for these tests, said rapid tests are “one of America’s best and most powerful tools” in fighting COVID-19.

“The notion that we would wait until summer to get these tests to people … is ludicrous,” Mina said.

The European nation Slovakia slashed infections by nearly 60% within one week under a widespread screening when combined with rigid quarantine measures.

A more ambitious mass screening program is underway in the United Kingdom. It launched a pilot program evaluating Innova’s test in Liverpool, but has expanded the program nationwide. The UK ordered more than $1 billion of these tests as it rolls out a more aggressive screening program.

Innova’s test is used in 20 nations, and the company is ramping up production to meet demand. Most of the company’s tests are made at a factory in China, but Innova opened a factory in Brea, California, and will soon open a 350,000-square-foot facility in Rancho Santa Margarita, Elliott said.

“It sounds like a lot, but it’s not,” Elliott says. “People need to test 3 times per week to effectively break the chain of transmission. There are 7 billion people in the world.”

The Biden administration’s purchase of more than 60 million tests won’t support a mass screening program for long, especially if schools and businesses test people two to three times each week.

‘Reasonable and prudent to randomly test the president’: President Joe Biden continues to be tested regularly for COVID-19 despite vaccination

The FDA  has issued emergency authorization for dozens of tests using different technologies for use in labs, point-of-care at medical offices and home tests.

The $30 Ellume test is the only one that can be used at home home without a prescription, doesn’t need a lab and can deliver results in 15 minutes. Abbott BinaxNow’s home test requires a telehealth provider’s referral. Other home tests require people to send saliva or nasal swab samples to an outside lab.

Innova has so far submitted data twice to the FDA but has yet to gain clearance. It will submit more data in coming weeks as ongoing clinical trials progress, company officials said.

In July, the FDA issued a document calling for home tests to correctly identify the virus that causes COVID-19 at least 90% of the time. But a high-ranking FDA official overseeing testing told USA TODAY the agency will consider tests with lower sensitivity – a measure of how often a test correctly identifies the virus.

“That has been our position from the very beginning, we’re trying to facilitate access to tests that work,” Shuren told USA TODAY.  “Specifically, accurate and reliable tests so the American people can have confidence in that.”

Some lab experts are wary of widespread screening of people without symptoms.

“Each type of test has its place, but it needs to be correctly used,” said Dr. Patrick Godbey, president of the College of American Pathologists.

Godbey said rapid antigen tests work well when used on a person within five to seven days of symptoms. However, when used to screen people without symptoms, antigen tests are much more likely to miss infections.

Cheaper tests might be more accessible, but he worries about missed cases if used as widespread screening tool. That could give people a false sense of security if they falsely test negative.

“You have to balance the (test’s) cost with the cost of missing someone who is positive and allowing that person to interact with other people,” said Godbey, a lab director at Southeast Georgia Regional Medical Center in Brunswick, Georgia. “That’s a real worry. It boils down to the sensitivity of the test.”

Innova’s rapid test already has been studied extensively in the United Kingdom by a team at University of Oxford and the government’s Porton Down lab.

In a non peer-reviewed study evaluating rapid tests made by Innova and other manufacturers, the research team concluded the tests are an “attractive option for mass testing.” But the researchers said the rapid tests should be evaluated for accuracy and potential benefits when used frequently.

The study evaluated 8,951 Innova tests performed on clinic patients, health staff, military and school children. The study found Innova’s test correctly identified 78.8% of cases in a group of 198 samples compared to laboratory-based PCR tests.  However, the test’s sensitivity improved to more than 90% on samples with higher virus levels, and the study cited an “expanding body of evidence” that people with higher viral loads were more infectious.

Other experts said the nation should shift the its testing strategy to one that emphasizes screening with rapid tests to identify outbreaks more quickly.

Health officials say the coronavirus will likely become endemic in the next several years: What does that mean?

And part of that strategy should address how governments evaluate the accuracy of rapid tests.

In a comment published Wednesday in The Lancet, Mina and researchers from University of Liverpool and University of Oxford said recent studies have misinterpreted the sensitivity of rapid antigen tests.

They argued lab-based PCR tests can detect fragments of virus when people are unlikely to spread virus to others. The result is people isolate longer than they need to after testing positive on a lab test.

Mina said how regulators in the United States and other nations interpret data from the United Kingdom rapid-testing program is of “immense global importance.”

“We know that the American people want these tests,” Mina said. “There’s no reason that this test should be illegal. That is insane.”