“Modern Family” star Jesse Tyler Ferguson has been practicing improv in the kitchen.

The 45-year-old actor, who portrayed lawyer Mitchell Pritchett for 11 seasons on the hit ABC sitcom, has been using the pandemic to enjoy the fruits of his labor. That means taste-testing and altering recipes from his new cookbook “Food between Friends” – and feeding his own.

Jesse Tyler Ferguson was slated to star in Broadway’s “Take Me Out” this spring. (Photo by Bruce Glikas/WireImage)

“I’ve gone through different phases of my pandemic. I was cooking whatever I wanted, whenever I wanted,” Ferguson tells Fox from Los Angeles Tuesday.

That means steaks with “tons of butter” in his new sous vide machine, a birthday gift he’s been putting to good use, and a green chile chicken pot pie he whipped up for “Schitt’s Creek” star and friend Daniel Levy. 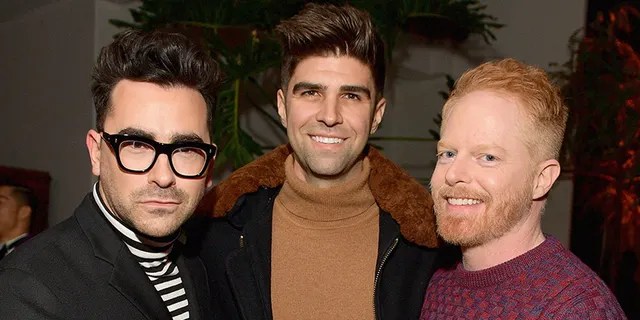 “There was a point in the summer where we could at least gather outside. We found ourselves in the same pod. Once a week we’d would walk to each other’s homes. We’d have dinner at his place or he’d come to ours,” the actor recalled of the green chile recipe that pays homage to his roots growing up in Albuquerque, N.M.

Ferguson says he’s been cutting back on indulging ahead of the holidays. And while he hasn’t decided on a New Year’s resolution just yet, he’s fully committed to going green, i.e. testing out recipes for pestos and roasted veggies. He teamed up with Planterra Foods’ plant-based protein brand OZO – which is donating $1 million worth of its products to food banks – to share his favorite dishes.

Like many of us, Ferguson also found himself scrambling for ingredients during quarantine, which led to new recipes featured in the cookbook he wrote with his bestie and recipe developer Julie Tanous, expected out in March. And since “Modern Family” aired its final episode in April, Ferguson is enjoying cooking for three – he and husband Justin Mikita welcomed their first child, son Beckett Mercer, in July. Now he’s working and parenting from home for the first time.

“It’s crazy because I’ve had a job for 11 years where I had to leave every day … and it’s been nice having to be forced to be back in my own home. Certainly, it’s been a great time to be home a lot with Beckett, but what I will say is that I’m so in awe of people who do it; for mothers who raise kids and go off and do another job, or fathers who juggle jobs and are parenting. Being a parent is a full-time job within itself, and I haven’t had two jobs since I was in high school. My hat’s off to people who do this all the time.”

Of course, he’s been oversharing every step of the way on social media.

“I thought I was having a hot flash today when I was holding Beckett. My chest got super warm really fast. Turns out he was just peeing on me,” the actor tweeted out this week.

While the pandemic has delayed production on movies and Broadway shows – Ferguson’s bread and butter – he’s still keeping in touch with castmates. The actor was slated to star in the Broadway revival of Richard Greenberg’s Tony-winning baseball drama “Take Me Out” alongside Jesse Williams (“Grey’s Anatomy”) and Patrick J Adams (“Suits”). But with the Great White Way closed until next year, and Dr. Anthony Fauci, the nation’s top infectious diseases doctor saying Tuesday that Broadway shows could be safe to attend by fall 2021, Ferguson has been staying in touch with castmates.

“At the beginning of the lockdown, we were getting on Zoom and doing read-throughs, keeping it fresh. We were in rehearsal for two weeks. Now it’s been a little more difficult because it’s been nine months,” he admits.

“I’ve had them over over the summer for dinner – Patrick Adams literally lives around the corner from me. I’ve seen our director [Scott Ellis] a few times. I’ve been connecting with the cast over Instagram. I can’t wait to get back.”

The best honeymoon-style holidays for solo travellers, from St Lucia to Kenya